One of the most emotional and beautiful days of our lives

This morning we woke up at Totaranui Campground in Abel Tasman National Park, we prepared breakfast with our gas cooker in front of our tent.
We did not have good reception here, but we checked our phone and we had received some messages from friends and family at home. Messages like “there are pilot whales stranded in New Zealand” and “where are you?”.
There were 200 Pilot Whales stranded in New Zealand the day before, they saw it on the news in The Netherlands.
But unfortunately they stranded again a few miles further.
We immediately checked where this had happened, it was at Farewell Spit near Golden Bay, just 50 minutes away from us!
We did not have to hesitate, we brushed our teeth and jumped in the car.
When we drove towards Farewell Spit we were very nervous.. Neither one of us knew what we would expect when we arrived..

We arrived around 10:30 at a lawn and there was a sign, it looked like there was some kind of festival going on, the sign said “Whale stranding”.
A sign we never saw before in Europe or another country, but here in New Zealand a whale stranding happens mostly once a year. 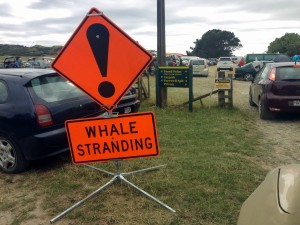 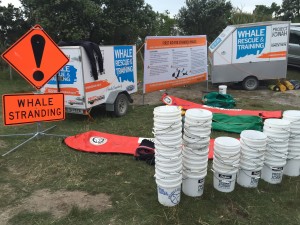 On the lawn they had made a parking/camping space for the volunteers.
We parked our car and walked to a Project Jonah member, we asked what we could do to help.
He send us to the beach to check over there, it was less than a mile walk from the parking space to the stranded whales.
We saw a lot of people helping in the distance, and when we walked closer and closer we saw the first dead whale lying on his side.. So sad.. 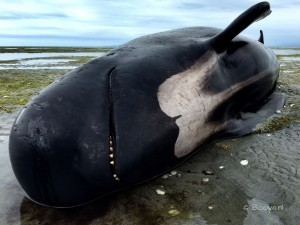 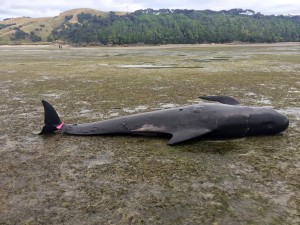 The dead animals had a red ribbon attached to their tales.
Most whales that were still alive had wounds on their body, from the sun. Luckily the sun didn’t shine this day, but it did the day before.

There were so many volunteers, locals, but also many tourists like us.
Beautiful to see that so many people come to help these whales. 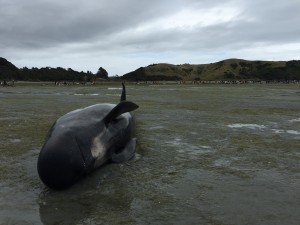 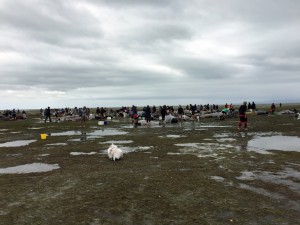 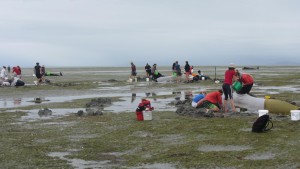 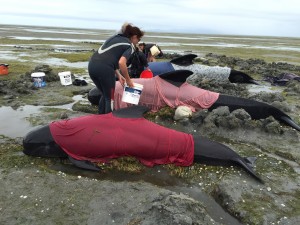 But it really breaks your heart to see such beautiful animals just lying there.. Helpless..
Many of them died the night before, but there were still more than 60 Pilot Whales alive when we arrived.
Some whales were close to each other, others far apart..
A mother and her young lay side by side, but the young was dead…. Truly heartbreaking to see this..
It brought tears in our eyes, and we still get a little emotional when we think about it..

When we walked further we saw a whale with just 1 volunteer, there we met Kim from Project Jonah, she was sitting next to a whale which they had called “Lucy“.
They had given every whale a name.
Besides Kim we also met another Project Jonah volunteer, Cameron.
Friendly people who also witnessed their first whale stranding today. 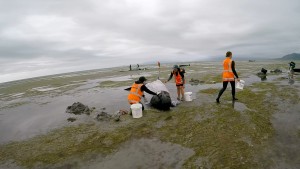 We helped Lucy and Momo.  There were not many volunteers at these two whales. They were lying further away than the other whales, and both alone..
The whales are covered in sheets so that they would stay cold and wet.
From 11:00 till 15:00 we were slowly pouring water over the whales with buckets.
But we had to watch out for their blow hole, because they breathe through it so we can’t pour water near it. And we also had to watch out for their tail. If they beat their tails (for example when they’re stressed or something else) they could easily break your leg.
We also had to dig the fins out of the sand, so they lay as comfortable as possible.

They could die from the stress, so we had to be really careful and try to keep them calm by touching them and talk to them. They feel like rubber.
Lucy was very stressed, it looked like she was hyperventilating, breathing heavily, sometimes we thought she was going to give up..
Momo was more relaxed. 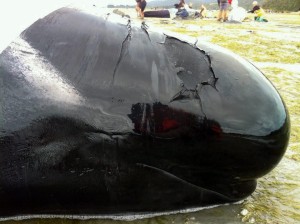 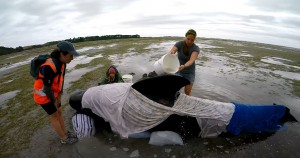 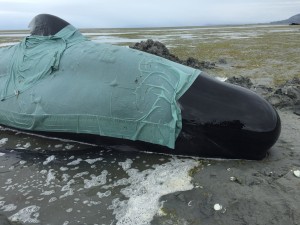 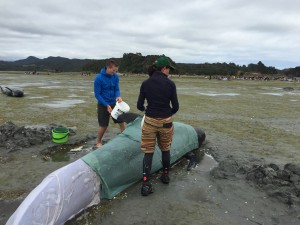 At the beach (with Momo) we met Eva from The Netherlands (who now lives in New Zealand for 7 years), she has a Canyoning Company in Abel Tasman National Park called Abel Tasman Canyons and she brought wet suits with her so more people could help. Amazing thinking of her!
Because without a wetsuit (which we didn’t have) you had to leave the beach around 16:00 because then the tide will come in and it would be too cold to stand in the water for a longer time. Besides the safety of the whales the project Jonah team were also thinking about the safety of every volunteer.
We could also borrow 3 wetsuits from Eva and we still thank her for that!

Around 15:00 hours we were requested to leave the beach and get something to eat/drink and rest a little bit before the tide will come in, because it was not sure how long it would take to get the whales back into the ocean and we had been helping for a few hours already.
Back at the car we cooked some food, and had some talks with other volunteers, waiting to be called to come help again.
When it was time we gathered all together and Project Jonah gave everyone instructions about what to do when we got back to the beach.
We had to be with a few persons per whale, the little ones could be looked after with 1 or 2 persons.
They suggested that if you helped one whale that day, to help that same whale now, because they had heard your voice earlier and it could help them feel more relaxed.
There were a lot of volunteers, enough for each whale.

We went to Lucy again, together with Kim, 2 French people and the 3 of us.
We started pouring water over her, waiting for the tide to come..
But it took a long time.. And we were also scared that the tide wouldn’t come high enough. This would mean that the whales would have to lay there another night. A night they probably wouldn’t survive.
We waited and waited.. The water came bit by bit.. Most whales already began to become more active when they feel more water coming, but we had to keep them calm.

When the water was rising, the 3 biggest female whales were laid on a sling with pontoons (some sort of airbed). Pontoons are inflatable bits at the side and the sling is the mat underneath the whale.
They drove these 3 whales into the ocean (still laying on the sling).
They hoped these whales would lead the other whales to follow them when the water was high enough.
Lucy was pretty big (around 6 meters) and heavy and we had to keep her still with the 6 of us. She felt the water and wanted to move, but we had to wait.. Also her nose was pointing in the wrong direction, so first we had to turn her, so that she would see the sea. Which was pretty difficult! But we managed it! 🙂 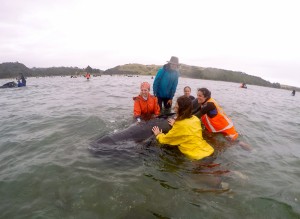 She wanted to swim but we had to hold her, the water was still too low.
A few baby whales were already swimming around because they are tiny, and for them the water was already high enough.
Lucy began to call to the young ones that swim past her. What a beautiful sound!
Not much time left before the tide will stop, so it was now or never.
Lucy was lying in some sort of sandbank, so she was lying a little higher. We waited for a little wave to come and then we pushed her a little bit (if she wasn’t breathing, otherwise she would get water inside her blowhole). We kept pushing until she wasn’t lying on the sand anymore.
Everyone of us was covered in Lucy’s whale mucous when she breathes (This doesn’t smell really nice haha). While helping her more and more into the direction of the ocean, a piece of her skin fell off (because of the sun burn). But Kim told us that this would heal again. 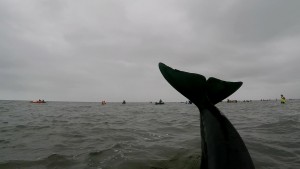 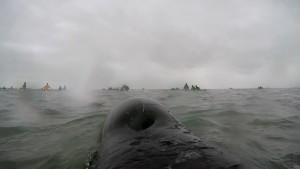 Finally she was released from the sand, but still we had to hold her. Waiting for all whales to be released from the sand. And waiting for the signal to let the whales go.
A pretty tough job, even though we were with 6 people.
The 3 whales on the slings were released, and swam a bit clumsy in front of us, tired from laying at the beach all that time.
The sign came, and we let Lucy go.. What a great feeling when we saw her swim away! 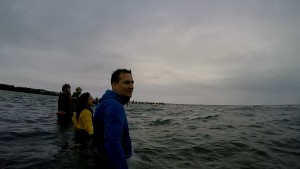 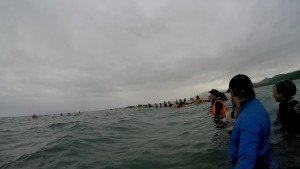 Together with all the volunteers (I think around 200/300 people in total) we created a sort of wall for the whales, to prevent whales from coming back to the beach.
One woman sang a beautiful song in Maori. Goosebumps! What an beautiful and emotional moment.
A boat followed the whales, and they swam farther and farther away..
The boat stayed 8 miles with the whales, looking to see if they are okay and if they won’t strand again.
When we waved the whales goodbye, we walked back, I think it was around 19:00/19:30 by then.
Back at the parking lot there was soup, hot drinks and fresh fruit for everyone. Well organized!
Project Jonah gave a little speech to thank everyone for their help. Together we did this! And that felt good!
We said goodbye to some volunteers we met that day, and looked for a place to sleep and freshen up.
We were tired, but we felt blessed that we could be a part of this.
What an amazing experience! Very intense and emotional, but so unique!

We kept in contact with Kim and Cameron from Project Jonah and also followed the news about the pilot whales, but after the last stranding the whales are no longer seen. So that’s a good sign!
We hope the whales are still  doing good today.

Together we saved 67 pilot whales that day.
A day we will never forget, Valentine’s day 2015..

For more info about Project Jonah check out their website: http://www.projectjonah.org.nz/

Watch a beautiful video of the Whale Stranding made by Bare Kiwi: